This article is printer friendly. Search for the print button at the end of the article.

The first to take life were the mushrooms - I started making them as soon as I heard that Iulian Tănase, a writer that I admire, was to release a new book related to snails. Then I bought the book. And only after that I started working on the snails - Prince Snail and Zuza, his (girl)friend. I decided to leave them, in the end, eye-less partly, because, even if I normally prefer all my dolls to have eyes, they look very cute as they are, and partly, because I was afraid to spoil their beauty with some animation-style eyes, which might not have been in accordance with their romantic style... You also helped me take this decision by expressing your opinion on my post in Amigurumi dolls facebook group.

The mushrooms and the shell of the snail are taken from a russian website (designer Anya Kirdyasheva), but I translated them in english for you. The body of the snail is designed by me, in accordance with the final dimensions of the shell. Please, take care that I only present the denomination of the stitches, informations on how they are worked can be found plenty on google and youtube! I hope you enjoy making these items!

...But first, let's admire a bit the photo-shoot that just happened in the garden - in my own fairytale, Zuza and Prince Snail decided to get married. They hired me as their photographer and only called the two mushrooms to be their witnesses. The bride bouquet was an autumn leaf, which she shared (instead of champagne) after the ceremony with her newlywed. 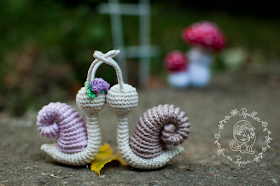 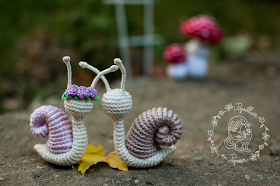 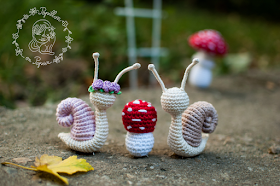 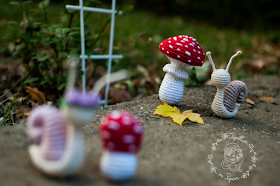 The snails were worked using Catania Originals cotton yarn and 2mm crochet hook. They measure approximately 6x8cm (without the horns). I inserted copper wires (2mm thick) into the snail body, as it is indicated in the sketch that I made for you, bellow. The horns were covered in yarn using fabric glue. 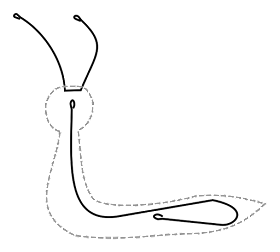 
Insert the horns, curl the ends as pictured above, then cover the horns in yarn. Wait for the glue to dry, then stuff the head and continue working. Stuff the body a bit as you advance. Insert the body wire after you finish and stuff the head.


Don't cut the yarn, turn along the front loops, slip-stitching to the peak – I worked my slip stitches not in a normal way, but from top to bottom. When reaching the peak, cut the yarn, leaving a long tail which you will pass trough some of the slip-stitches in a straight line to the bottom. Stuff the shell, then pull tight the yarn tail – the shell will curl by itself. Secure tightly. Shape the body such that it is a bit flat on the portion when the shell will be placed. At the end, I glued my shell to the body carefully, using fabric glue and some pins until the glue dried.

For the girl, I realized three little roses using 0.75mm hook, embroidery thread and this free pattern. I also worked two double and two single leaves for the crown. I attached these flowers to the head using fabric glue.

The mushrooms were worked with Drops Paris and hook 2.5 mm, tightly. 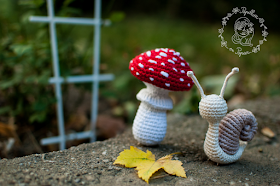 
I embroidered the specks on the hat, then shaped my mushroom by hand, inserting a wire to secure this shape, I stuffed it as much as I could and then I glued the parts one to another using fabric glue. I did the same with the small mushroom. 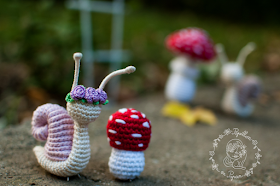 Embroider the specks on the hat, then glue the two parts together. 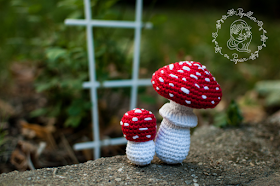